When some prospective buyers couldn't find his farm, Plato patented a clever wayfinding strategy known as the Clock System.

My redrafted version of geographic climatologist Val Eichenlaub's map of snowbelts, pubished in 1970 in the Bulletin of the American Meteorological Society. He included a slightly different map in his 1979 book Weather and Climate of the Great Lakes.

Snowbelts form downwind from the Great Lakes, a prime source of moisture, and their boundaries can vary markedly from year to year. Air flow is generally from the north, the northwest, or the west. Topographic obstacles such as Tug Hill (east of Lake Ontario) and the Keewenaw Peninsula cause the moist air to rise, cool, and produce heavy amounts of snow.

Available from Syracuse University Press. Click here for coverage on the Press's website. And the click on the Book Description link at the bottom. Also available from your favorite online bookstore.

Lake-effect snow is deposited by narrow bands of clouds formed when cold, dry arctic air passes over a large, relatively warm inland lake. Snow bands attached to one of the Great Lakes, or even the Great Salt Lake or Hudson Bay, can produce an intense “white out” lasting from a couple of minutes to two days. Television meteorologists call this the “lake-effect snow machine” because a slight shift in wind direction can shut down the snow suddenly, like flicking a light switch. With perhaps only half the water content of regular snow, lake snow is typically light, fluffy, and relatively easy to shovel. And because long stretches of gray days with persistent flurries are the norm, shoveling is a near-daily activity in the snowbelts, where whimsical weather is notorious for disrupting transportation, closing schools, canceling events of all types, and occasionally collapsing old or poorly designed buildings. Intriguing stories of the lake effect’s quirky behavior and diverse impacts include widespread ignorance of the phenomenon in the nineteenth and early twentieth centuries, before a network of systematic observers had collected several decades of data worth mapping, and the advent of reliable short-term predictions based on satellites, Doppler radar, and computer models. 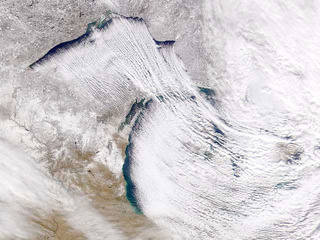 I’ve written this book for two audiences: Great Lakes residents who want to understand the lake-effect phenomenon and its implications more fully and nonresidents misinformed by a media stereotype of ceaselessly brutal winters. What I intend as a comprehensive and engaging narrative fits nicely into seven chapters, each with a telling one-word title: Recipe (chapter 1) outlines the basic physics essential to understanding what follows, Discovery (chapter 2) explores the slow cartographic recognition of lake-effect snow as a distinctive meteorological phenomenon, Prediction (chapter 3) examines the evolution of forecasting strategies, Impacts (chapter 4) limns societal effects and coping strategies, Records (chapter 5) investigates the collection and use of snowfall data and questions the national obsession with extreme weather, Change (chapter 6) looks at historical trends in snowfall and the regional implications of global warming, and Place (chapter 7) identifies seasonality as a key component of local economies and regional culture.

My redrafted version of Val Eichenlaub's map of snowbelts, pubished in 1970 in the Bulletin of the American Meteorological Society. 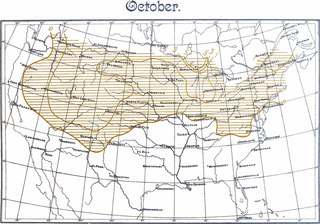 Mark Harrington's map of October snowfall was his only monthly map to hint of lake-effect snow. Notice the 130-inch snowfall line immediately south of Lake Superior on the Keewenaw Peninsula, an appendage of Michigan's Upper Peninsula. None of his other seven monthly maps shows a lake effect. Harrington based his study on about 100 stations, many too far south for significant snow. Maps of winter precipitation in previous studies were based on seasonal precipitation, for which snow was melted and combined with rain; they showed no snowbelts.

In 1894 Mark Harrington, chief of the U.S. Weather Bureau, published his Rainfall and Snow of the United States. An "atlas" supplement accompanied his 80 pages of text and tables. Only one of the supplement's 23 charts addresses snowfall, and it consists of eight small maps like this one, each covering one month, October through May. In 1896 a textbook by Frank Waldo included a map of average annual snowfall, presumably based on Harrington's maps or data. Its only snowbelt was in the U.P. 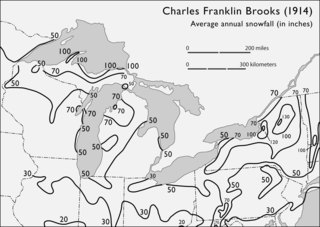 My redrafted version of Charles Franklin Brooks' 1914 map of mean annual snowfall, one of numerous maps in his geography dissertation at Harvard.

Brooks based his snowfall map on a network of 159 stations, all in the eastern United States and all with 15 years of continuous data from July 1895 through June 1910. Brooks was the first climatologist to discover the Great Lakes snowbelts. His other contributions include founding the American Meteorological Society.

This "out-take" from the draft manuscript was originally part of the final chapter ("Place"), where a few colleagues felt it was out of place. I then made it an appendix labeled "Deleted scene," like the out-takes offered as "Extras" on movie DVDs. But there, my editor thought, readers would see it as the concluding chapter. I agreed but didn't want to give it up entirely--film directors must feel this way about some of their deleted scenes--so here it is: a short essay on the varied content of books titled LAKE EFFECT.

"Lake Effect is a unique contribution, an ideal example of how to describe complex geographical phenomena to an interdisciplinary and general audience." – Cary J. Mock, The Geographical Review

"Overall, this book is well written and gives a solid overview of the history and impacts of lake effect snow. . . . a must-read for anyone interested in weather/climate." – Bob Hickey, Cartographic Perspectives

2013 Central New York Book Award in Non-Fiction, awarded by YMCA’s Downtown Writers Center. Excerpt from the citation, prepared by judge Sonja Livingston, author of Ghostbread (2010): “The topics of meteorology and science can easily become overly technical or dry, but Monmonier’s writing is clear and engaging. Like the best nonfiction writers, Monmonier’s personal anecdotes, humor and passion for the topic is contagious as he invites readers to explore this unique weather phenomenon along with him.”

“For fans of snow, meteorology, cartography, history, weather records, maps and geography, Monmonier’s book is a treasure trove of engrossing and entertaining stories about some of the snowiest inhabited areas in the world. . . . Monmonier, as he did in his 1999 book, Air Apparent: How Meteorologists Learned to Map, Predict, and Dramatize Weather, weaves together a rich gumbo of history, science, geography and culture in Lake Effect.” – Doyle Rice, in USA Today

"Everything you expect from Professor Monmonier – thorough research, clear presentation, and unconcealed love of his subject.” – Bernard Mergen, author of Snow in America

"Mark Monmonier has delighted readers for years with book after book showing how geography and weather have shaped human history. . . . He’s turned his flair for narrative to the story of the lake-effect weather that rules his native upstate New York. . . . Enter his world and you’ll be glad you did.” – William H. Hooke, Policy Program Director, American Meteorological Society

"Those who have never personally experienced lake effect snow cannot possibly appreciate what it’s like to see one of these intense weather events. Mark Monmonier delves deep into the subject and explains why lake effect snow happens, as well as its impact on the nation’s snow belt.” – Paul Gross, Certified Consulting and Broadcast Meteorologist

" Mark Monmonier . . . delivers a thorough and comprehensive overview of the subject, with the occasional touch of humor . . . the perfect book for true fans of meteorology and those folks who just want to learn more about this form of precipitation." – Laurel C. Wernett, Life in the Finger Lakes

". . . provides an understanding as well as a meteorological and scientific cartography-based history of the weather phenomenon known as lake-effect snow . . . Despite what one might expect in a heavily technical book, the writing is clear and accessible and numerous explanatory descriptions are included." – Reference and Research Book News