A North American inventor and map publisher, John Byron Plato contributed to wayfinding in the early decades of the twentieth century, when the automobile and an emerging network of improved roads were opening the countryside as never before. Automobility exposed a void in the cartographic treatment of rural areas—road signs were scarce and house-numbering did not extend beyond the built-up parts of cities and towns.

Plato had many careers. He was a student at a pioneering manual-arts high-school in Denver, a soldier in the Spanish-American War, a draftsman, a dealer in veneers and manager of a lumber yard, an inventor and manufacturer of a parking brake of sort for horse-drawn vehicles, a schoolteacher, and a livestock farmer, in roughly that order. After he lost a presumably profitable sale of some calves to a buyer who could not find his farm, Plato devised an innovative address system based on a map and rural directory.

Plato and the buyer learned a bit late that an RFD (Rural Free Delivery) address was inadequate for wayfinding without the personal guidance of a letter carrier or an annotated copy of the official map of delivery routes. After applying for a government patent, he traveled to Washington to persuade the Post Office Department to adopt his system. In the grips of bureaucratic inertia, postal officials refused to assume the added cost of helping travelers reach their destination.

Even so, they bestowed the name "Clock System" on Plato's endeavor. As the patent's single drawing confirms, "Clock System" is a fitting label for his solution, whereby two coordinates describe a farmstead's location relative to a local business center. One coordinate is the farmstead's distance outward from the central place in miles, rounded downward, and the other is its direction from the center, assigned to one of twelve 30-degree sectors, named for the twelve hours of the clockface. The mile and the hour identify a specific cell, which Plato called a "block."

A "Clock System" address is based on a county map identifying central places and their trade areas. A specific address includes the name of a central place, the mile and hour for the block, and a unique letter or number representing a specific dot within the block. The rural directory includes an alphabetical list of residents and their addresses as well as ads for local businesses. Giving each farmer a free copy assured advertisers of complete market coverage.

Plato based his business in Ithaca, New York, where he published rural directories for fifteen counties and several individual towns between 1919 and 1929. Most town-level maps were published early on for portions of Tompkins County, soon to be covered by a single county-wide map.

In 1936, with the country recovering from the Depression, a handful of Ithaca entrepreneurs restarted the rural directory business without Plato's involvement. Their so-called Compass System replaced the twelve hours of the clockface with the eight cardinal and sub-cardinal directions of the compass card. By 1940 they expanded the number of counties covered from fifteen to thirty-one.

A diversity of sources—newspaper and magazine stories, published patents, documents in the National Archives, land records, genealogical data, city directories, and census-takers' notes—demonstrate that Plato, although a minor figure in the history of cartography in the twentieth century, was a clever person who made a noteworthy and singular contribution to map-based wayfinding. In patenting and promoting his invention in multiple places over a period that stretched from 1916 to 1937, he was successful as both an inventor and a map publisher. Diverse factors contributing to Plato's success include a knack for technology, skill in mechanical drawing, and a sense of discipline and commitment. 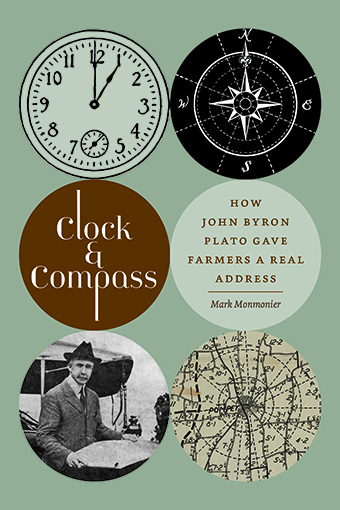 My book cover cleverly integrates the book's title and subtitle and the author's name with icons reflecting both the clock and the compass inspirations for two map series, a photo of Plato next to the Model T Ford he used for fieldwork, and a small sample of a Clock System map.

What's It All About?

Clock and Compass is largely framed by Plato's life story: where he lived and worked, and where and what he mapped.

Chapter 1, "No Real Address," introduces the book by outlining the problem Plato proposed to solve: though efficient for delivering mail to rural residents, the Post Office Department's Rural Farm Delivery address was of little use in finding someone's farm. Plato not only pinpointed the problem but proposed a workable solution: a locational framework that combined a map and a directory he called a "rural index."

Chapter 2, "Denver," examines Plato's life in Denver, where he attended high school, worked a variety of jobs, patented and manufactured the Plato Horse Hitch, and began buying farmland a half-hour north of downtown along an electric interurban railway line. His interest in farming reflects his attending a thirteen-week "Short Winter Course" for farm youth at Cornell University, hundreds of miles to the east. He didn't start farming until he was in his late thirties.

Chapter 3, "Semper," named for where he lived when he filed his patent application, focuses on Plato's experiences as a livestock farmer who depended on newspaper ads and the mails to bring buyers to his farm. When some prospective buyers couldn't find his farm, the resulting "lost sale" became the impetus for the "Clock System" map and directory as well as an appealing sales pitch. Much of what we know about Plato reflects his talent for storytelling and eagerness to talk to reporters.

Chapter 4, "Exploiters and Advocates," looks at would-be business partners eager to profit from Plato's patent and at the rural sociologists at Cornell University who saw the "Clock System" as a means of promoting community identity among farmers.

Chapter 5, "Ithaca," reviews the map publishing business he ran successfully for over a decade in Cornell's hometown. Plato was an engaged member of the Ithaca community, and his business provided local farm-oriented businesses with an efficient advertising medium.

Chapter 6, "Ohio," looks at Plato's fraught experience as a map publisher in Ohio, where he relocated briefly when the Great Depression undermined his business in Upstate New York.

Chapter 7, "Washington, DC," examines the lifeline provided by federal employment after the Depression devastated his Ohio restart. Eager to put his cartographic experience to good use, he became a mapmaker and expert on farm classification at the Agricultural Adjustment Administration and the Census Bureau. While working downtown as a civil servant, he began buying land beyond the urban fringe in Prince George's County, Maryland.

Chapter 8, "Camp Plato Place," examines the final phase of Plato's life, when he resisted urban encroachment, developed a nature center and day camp for the region's Girl Scouts, and at age 71, married a 48-year-old woman from eastern Europe.

Chapter 10, "Postmortem," assesses the import of Plato's map design and business, which thrived for a brief period between World Wars I and II—with the support of Cornell's rural sociologists who recognized the value of a meaningful address, and in a distinctive geographic niche of rolling terrain, small farms, and an irregular road network.

Clock and Compass is richly illustrated, with 55 maps, diagrams, and photographs that outline the design and details of Plato's maps as well as the geography of his activities, the territory he mapped, and where he lived and owned property.

"Well-written, thoroughly researched, and richly illustrated, Mark Monmonier's Clock and Compass is more than a simple tale of an entrepreneurial cartographer. The fact that Plato's system was not widely utilized does not make the story less significant. Monmonier offers insight into geography and mapmaking, the changing social landscape of rural America, and government bureaucracy."—J. L. Anderson, Author of Capitalist Pigs: Pigs, Pork, and Power in America

"A leading expert in 20th century cartography, Mark Monmonier has given us a thoroughly researched and engaging history of John Byron Plato and his ingenious, patented clock system for creating rural addresses. This is a must read."—Judith Tyner, Author of Women in American Cartography

"Monmonier shows how Plato's work impacted American culture related to our road network; existing government maps and privately produced county atlases; the Public Land Survey System; Plato's other non-cartographic patents; his creation and patenting of the Clock or Compass System; and how his system was promoted."—Dan Cole, Smithsonian Institution

From the dedication page:

For my grandsons, Camden and Cooper

Plato is one of 31 inventors profiled in a 164-page book, co-authored with four Syracuse University students. Supported by a National Science Foundation grant, the Directory includes short, one-paragraph capsule bios of 24 additional inventors. 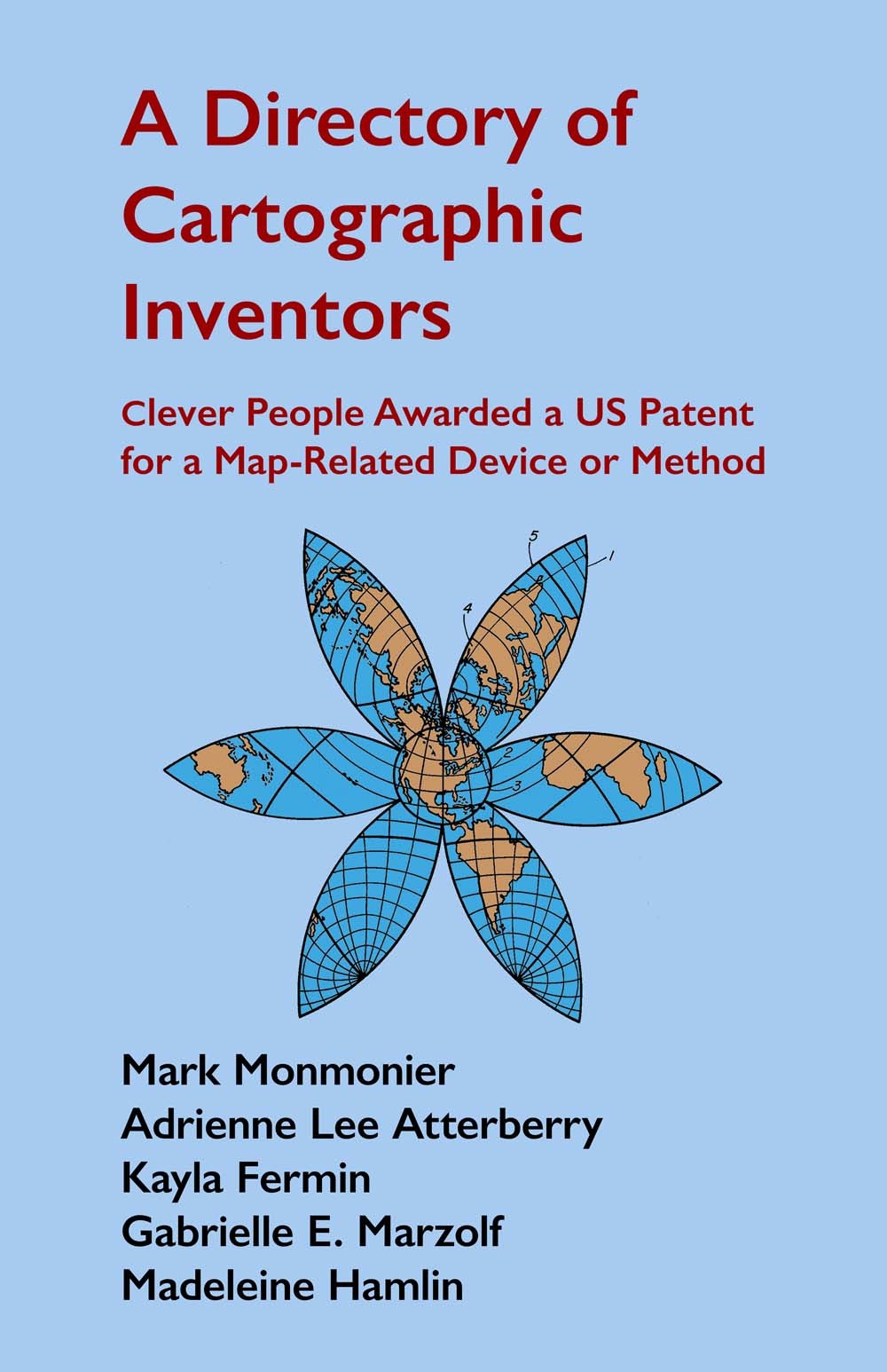 A free copy of A Directory of Cartographic Inventors: Clever People Awarded a US Patent for a Map-Related Device or Method is available through SU's SURFACE (Syracuse University Research Facility and Collaborative Environment) website. To download a PDF file, click here. A paper copy can be ordered through Amazon.

"Readers come away from Monmonier's book with a rare glimpse into one of cartography's less-told tales, the story of a small-time inventor who made a lasting impact on mapmaking and, more importantly, the communities he served. By giving farmers an address, Monmonier shows that Plato offered them a defined concept of place and a richer undersanding of their rural context." – Joseph Grubbs, IMCoS Map Journal

"Patents and Plato: Map-related patents in general, and one clever inventor in particular," April 2018, Library of Congress / Washington Map Society.